Circle of Life members brought MALDI-TOF to Guelph General Hospital, and one year later, it’s proven to be a game-changer.

It was learning of MALDI-TOF that inspired George Oelkuch to start supporting The Foundation of Guelph General Hospital through their Circle of Life giving program.

MALDI-TOF is a spectacular advancement that allows for rapid and precise identification of infection-causing micro-organisms. Had this technology been at Guelph General Hospital when George was a patient, it may have saved him much suffering.

“I would never want anyone else to experience what I had” said George of his own personal experience. George contracted Typhoid Fever while on vacation. A few days after returning home, he started to develop a fever and flu-like symptoms.

George was admitted to the Hospital with a fever of 106 Fahrenheit. “I felt like I was dying,” he recalls. He was immediately placed in an isolation room and blood was drawn for testing. While waiting for the results, George was started on a broad-spectrum antibiotic.

It took about a day and a half for the preliminary results. In the meantime, George suffered with high fever, severe pain, and loss of control of his body.

One night was particularly bad and the next morning when George thanked the nurse who cared for him over the night, she told George that she wasn’t sure if he would make it through.

In a presentation that George made to the Circle of Life members who funded MALDI-TOF, he predicted “I think not only will it save people from suffering, I have no doubt it will save lives.” 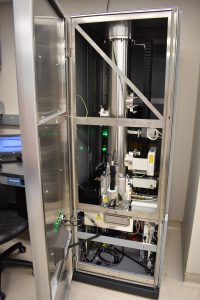 We recently met with John TarBush, Microbiology Charge Technologist and Dr. James Murdoch, Infectious Diseases Consultant, to see if this new technology has been living up to everything it promised, and to see if George’s prediction was right.

“I’m blown away by this technology” remarked TarBush. “It’s doing everything we were expecting it to do.” It’s fast and reliable. It has helped to streamline processes and this means the Hospital’s laboratory can absorb additional workload with the same number of employees. Most importantly, it is improving clinical outcomes for patients.

With rapid identification, patients receive targeted treatment within hours. This helps the patient get better faster and often helps reduce secondary complications of the infection.

Dr. Murdoch even shared an example where he is quite confident that MALDI-TOF may have saved the life of a patient who developed a life-threatening illness in hospital. Within hours, an uncommon and unexpected pathogen was correctly identified.

“The pathogen in this case was definitely unexpected. Without MALDI-TOF there would have been substantial delay initiating the correct treatment”, recalls Dr. Murdoch. “As a result, we were also able to prevent possible permanent neurological damage.”

And so it seems, George’s prediction was right. This story also shows that we are right about something that we say often at the Foundation – our donors help save lives and improve health.