Because of the rain, our ridership was lower than in the previous two years, yet many new records were still set this year. Tour de Guelph Five raised over $100,000 in net proceeds and over $66,000 of that was raised through pledges collected by the dedicated riders! That’s almost $12,000 over what our riders raised last year.

53 Teams registered as part of The Bike Shed Community Team Challenge. Once again, the top fundraising team was the Guelph General Hospital Team, raising just shy of $9,000! They will receive an after party hosted by silver sponsor, The Bike Shed.

The top three fundraisers, Mike Diamond, Ross McKinnell, and Charlie Barnes, raised over $14,000 between them – amazing! And a special mention must be made to Mike Diamond whose five-year Tour de Guelph career total now surpasses $18,000 raised!

Ethan Steele was the top youth fundraiser for the second year in a row, but this year, he raised more than double what he raised in the year prior.

This year’s event offered many new elements to heighten the riders’ experience. An official Tour de Guelph cycling jersey was offered to all riders who committed to raising a minimum of $300. A total of 69 riders took on this challenge when they registered to Ride-for-the-Jersey! Do the math and that equals a $20,700 fundraising commitment! Plus many of these riders raised far beyond the minimum commitment.

In addition, Tour de Guelph introduced the Finishers’ Podium photo opportunity, sponsored by GuelphToday.com. 119+ riders graced the podium for a fun pic and you can view them all on GuelphToday.com.

Tour de Guelph also had its most successful year in terms of cash sponsorship. Sponsorship dollars are incredibly important as they go directly towards net proceeds. Altogether, 52 sponsors and in-kind contributors supported this year’s event. Thank you!

All proceeds of this year’s event will help Guelph General Hospital purchase an urgently needed CT scanner to replace the now 13-year old scanner. Many local organizations will also benefit through the Rotary Clubs of Guelph South and Guelph Trillium.

Plans are already underway for Tour de Guelph 2019, taking place on the fourth Sunday of June. The Tour de Guelph Organizing Committee is already bouncing around many new ideas to make next year even better. Registration will open in January, at that time you may find all the details at www.tourdeguelph.ca, or subscribe to the Tour de Guelph email list for important event updates, or follow Tour de Guelph on Facebook and Instagram. 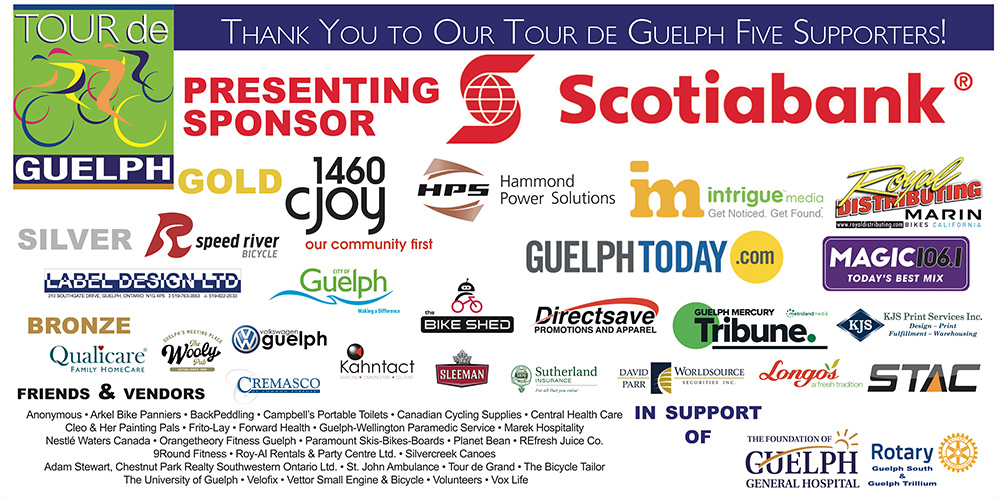