Not long ago, the Hospital took delivery of the latest in mobile X-ray technology, funded by our caring donors. 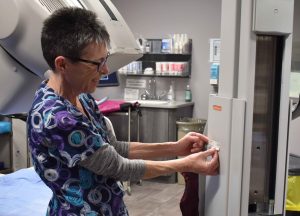 Tracey Damaren, Team Lead Radiology at Guelph General applies a “donor funded” label to one of the new portable X-rays.

“Clinicians love this!” exclaims Mike Lindsay, Director Diagnostic Imaging. He enthuses, “The image is captured digitally and appears on the screen right away. There is no running back to the department to process a cassette. The image is available right at the bedside in about three seconds.”

This is a giant leap forward from the machine’s 15-year-old predecessors. They required the image to be captured on a cassette which had to be taken to another department for processing. Then, the image had to be reviewed by a technologist to ensure it was the one that the physician needed.  In addition to shortened turn-around time, the image quality is vastly improved.

“The images are crisp and detailed, allowing for more accurate diagnoses,” says Dr. Samir Patel, Chief of Diagnostic Imaging. “Our ability to obtain clear images on some of the sickest patients in the hospital has greatly improved patient care and safety.”

Not only have better quality images resulted in better care, but also the quick turnaround time has resulted in increased efficiencies. For example, the units are used in the Operating Rooms during hip revisions and replacements. Orthopaedic Surgeon, Dr. Steve Hoey, notes that, “With the new machines, we can see right away whether the joint is in the right spot.” This saves about five minutes each procedure.

The mobile unit is specially designed to allow easy positioning in cramped spaces. At the same time, it can collapse down so the techs have great visibility while driving it down hallways. The units even came with small-sized, digital detectors that fit in a bassinette.. That way, babies can stay comfortably in their bassinette while having their x-ray taken.

Before the unit was selected, various models were considered. The decision involved a variety of staff which resulted in a well-received choice. “The units were designed with tremendous consultation with technologists so there are also simple things like ample onboard storage and leg room to allow for natural walking with the unit,” says Mike. “Infection prevention and control considerations are well thought out too.”

While the machines are technical marvels directly improving the care provided, they also have a feature designed simply to raise everyone’s spirits. One unit has decals making it look like a race car, the other looks like a cartoon car being driven by a dog with its head out the window.

Portable x-ray units travel throughout the Hospital to help care for our most ill patients. In the Special Care Nursery, tiny babies have x-rays to monitor conditions such as respiratory distress or cardiac issues, or to check placement of a tube. Most patients in our Bob Ireland Family Intensive Care Unit will have a daily x-ray to check things like the placement of tubes or the functioning of the lungs. 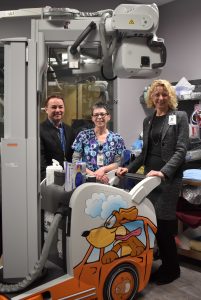 Proceeds from Black Tie Bingo 2017 and from the 2017 seasonal mailings helped fund these new X-ray units. We are grateful for all those who supported these initiatives and helped bring this essential patient care technology to our Hospital.