When Doug and Cathy MacMillan bought their company, they knew they wanted to build their business on building community.

They didn’t have a concrete plan, but their intent and their ability to identify opportunities led them down a twenty-plus-year path that now has their business deeply invested in community – and thriving as a result.

Their first philanthropic engagement with the Hospital and the Foundation was when they worked for Barrow Communications, the company that they later bought and renamed The Letter M Marketing. Barrow donated the design work for Hot Foot Happening, a 1990s event in support of Guelph General Hospital and St. Joseph’s, and Doug and Cathy participated in the event.

“It was at this event that we first started to understand that community has a role in the Hospital’s ability to provide exceptional health care,” recounted Doug.

With this understanding, they were motivated to support the Hospital. Within a year of owning and leading The Letter M, they became involved with Taste of Guelph, another fundraising event in support of health care in our community. As a leading sponsor they provided all design work pro bono.

In 2002, they attended Black Tie Bingo for the first time, and started supporting it shortly after that. Every year Black Tie Bingo is reinvented through a new theme and Doug felt this would be a good platform to showcase his team’s creative talent, while giving back to the community.

Since 2004, The Letter M has been an important sponsor for Guelph’s largest gala fundraiser. Each year, they produce a distinctive look that brings the Black Tie Bingo theme to life and it is used in posters, advertising and online. 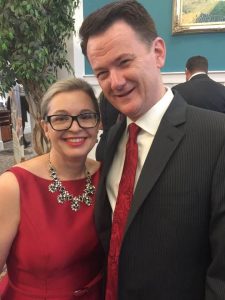 “My early involvement with the Foundation shaped my career and how I think in ways that I didn’t expect,” reflected Doug during our interview with him.

For his business, it has created different opportunities to engage with his staff that has resulted in greater job satisfaction and contributed to low staff turn-over. It also influences his hiring decisions as he thinks about the kind of community he is trying to build with his staff.

It has even shaped some of the service offerings he now offers. Most recently, The Letter M was awarded a project from a large organization to develop an employee giving and engagement program.

Doug firmly believes that every brand has a responsibility to support the community, and his experience with the Hospital has taught him that.

It isn’t only his professional experiences with the Foundation and the Hospital that have influenced his committed support.

“We had our babies there, and have been there for emergencies,” said Doug about his personal experiences at the Hospital.

Doug and Cathy are proud of their contributions. The Letter M is now recognized on the Foundation’s Donor Wall at the Benefactor level, those who have given at a level greater than $100,000.

They have brought their children to see the donor wall and hope to influence Hannah’s and Nik’s desire to contribute to community as they grow and develop their own values.

The contribution of Doug, Cathy, and The Letter M Marketing team to the Foundation is incredibly meaningful. Donation of in-kind service helps the Foundation keep fundraising costs as low as possible, and this allows the Foundation to transfer more donor dollars to the Hospital where they will have the greatest impact – helping save lives and improve health, together with our community.