Giving “a little back” for 25 years

Dr. Harold Jackson, along with his wife and three young children, moved to Guelph in 1980 when he was appointed Director of Scientific Affairs for Johnson & Johnson Baby Products Company (later to be called McNeil Consumer Healthcare). He retired in 2004 as Vice-President of New Business and Product Development.  Dr. Jackson lived and worked in Guelph for 25 years and since has been a loyal supporter of Guelph General Hospital.

In the late 80s, Guelph General Hospital started fundraising for much needed equipment. At that time, Dr. Jackson was already quite involved with the Rotary Club of Guelph and was networked with a lot of other Rotarians who were canvassing for the Hospital, and so Dr. Jackson decided to join them.

If I was going to canvas, then I also needed to make a commitment.

and that is what first motivated him to start supporting the Hospital.

Over the years, Dr. Jackson continued to be a regular supporter of Guelph General, responding to almost every mail appeal. “I just have a lot of respect for the Hospital and the good medical doctors who do such great work in the community” said Dr. Jackson when asked what motivated him to continue giving over so many years.

Many other influences at play

McNeil Consumer Health, where Dr. Jackson worked, had always strongly encouraged its employees to get involved in volunteer work within their community. “It helped broaden personal development and understanding of other needs in the community”.

Dr. Jackson raised three children in Guelph, each very different and each very successful in their individual path. His eldest is a professional musician, his middle child is a financial planner, and his youngest is a commercial pilot having recently returned to school to study business and economics. Dr. Jackson attributes much of their success to having grown up in Guelph, an opportunity-rich community.

And then there is also the influence of some strongly rooted family values. Dr. Jackson explained:

My parents always instilled in me that the community where you earned your money was always a good place to give a little back.

A few years ago, after retiring, Dr. Jackson moved to London, back to his childhood home on farmland that has been in his family since 1839. “I always imagined I would go back there one day,” but “I haven’t cut the umbilical cord,” he said as he explained how he is still very much tied to Guelph.Dr. Jackson still maintains his family doctor and family dentist in Guelph. He and his wife are also members of the Guelph Chamber Choir which brings them back to Guelph once a week and even more frequently leading up to performances. He is still a member of the Rotary Club of Guelph (his membership now going on 33-years!); and, he still continues to support Guelph General Hospital.

We are so very thankful for the support that Dr. Jackson has shown over the years. We were honored to have the opportunity to speak with him to get to know him a little more and to be able to share his story with others to be inspired by. 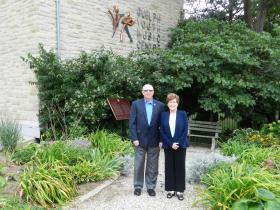 Dr. Harold Jackson is shown here with wife Nancy Jackson outside the Guelph Youth Music Centre where they still practice with the Guelph Chamber Choir on a weekly basis.